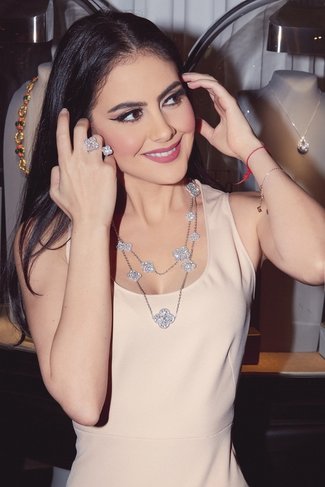 On your screens
Her first introduction into the limelight, came in the role of TV Presenter for a popular broadcast station in Dubai; it wasn’t long before Tamara was found hosting the nation’s major events. As the ‘face’ of Dubai’s International Film Festival TV show, she also hosted many other key attractions in Dubai’s social calendar. Labelled the ”UAE’s gem of a talent” she pioneered the first ever ‘special’ (in-depth coverage) of film festivals in the region, compiling interviews with the likes of George Clooney, Gloria and Emilio Estefan, Paulo Coelho, Steve Hickner and many more international celebrities.


​Style icon
Intrinsically creative, Tamara always looks the part, and bang on trend, she established Dubai’s popular ‘House of Glamo’ and her own glamorous line ‘Tamara Al Gabbani’. Featured on the cover of magazines in the Middle East, and written about in international magazines such as Vogue, Vanity Fair and Glamour, she is also featured on blogs, and interviewed on TV shows, Tamara is considered one of the Middle East’s top personalities and trendsetters.

Designer
Combining a unique creativity and an entrepreneurial spirit, Tamara launched The Tamara Al Gabbani brand. A stunning collection of Goddess inspired evening gowns, jalabiyas and abayas. The line is exclusive, high quality and elegant. She launched her collection at Burj Khalifa and sold the entire collection before it had even been viewed. 3 days later, she was walking on Cannes Film Festival’s red carpet, and was awarded Best Dressed at Cannes Film Festival in her own designs, a first for a woman of the Arab region.

Female Empowerment Message
Tamara’s brand is more than meets the eye however, the collection isn’t just about the clothes; it’s a belief system. Tamara believes that all women are beautiful Goddesses. She incorporated this into what the modern day Goddess is; strong, independent but also graceful and chic. A great admirer and advocate of women, Tamara an independent woman in her own right, is often interviewed about entrepreneurship and female empowerment in publications, on television, and also speaks at events. She also supports Breast Cancer initiatives.

East Meets West
To celebrate her mixed Arab-Western heritage, and to promote bridging an East & West understanding and appreciation, Tamara created the ArabiAna Line. A combination of Middle Eastern Abaya’s, Jalabiyas and Kaftans designed with modern and western touches.

Humanitarian
A firm believer of giving, Tamara incorporates philanthropy into all areas of her life and career. Raising awareness for causes, aiding charities, organising events and fundraisers as well as activities and volunteering.
‘The simplest of efforts such as kindness, compassion and humanity can make all the difference to some, so imagine the possibilities if everyone gave back.’

The bigger screen
To nurture her love of acting, she continues to take part in a number of acting seminars, and has even trained with Hollywood Acting Coach Michelled Danner. To exhibit her talent, she performed several times to a public audience in The Entertainment Showcase. Her most powerful performance was playing the role of ‘Lisa’ in a scene out of the acclaimed film ‘Girl Interrupted’. She has also featured in 2 short films. Tamara was also cast the lead in Mohammed Abdu’s first ever music video directed by Yacoub Al Mohana

The future
In short, watch this space. The graceful example of a modern, popular and cherished Arab woman has much in store. ‘Whats next you ask?’ Tamara Al Gabbani coyly states, ‘I havent even begun’.

To know more about Tamara follower her on her blog www.IamTamara.com